How will War in Ukraine Affect the Georgian Economy?

Economic forecasts are made by applying different mathematical and statistic models. But there are no economic models for a situation such as the ongoing war in Ukraine because there are no directly relevant precedents. Economists need past experience to align their models with reality. And so, in the context of this ongoing crisis, economists form conclusions based on simple economic logic and by reviewing existing trends. You too can make similar conclusions using publicly available data and economic logic.

Let us analyze what might await Georgia as a result of Russia’s war in Ukraine. This requires an understanding of what might happen to our foreign economic relations:

How could foreign trade be affected?

Both Ukraine and Russia are major trading partners with Georgia, as are the European Union and Turkey, which will obviously also be affected by the war. Let us first look at those countries from which Georgia imports products. In 2021, Georgia’s total imports amounted to $10 billion U.S. Its main import partners were the European Union and Turkey, which between them represented 42% of Georgia’s imports in 2021. Russia accounts for a relatively smaller 10% share of imports, which has not significantly changed over the last 9 years. The import of goods from Ukraine accounts for 4.7% of total imports. Hence, we may say that Georgia will need to partially replace approximately 14-17% of its imports. Imports from Russia will also be complicated as a result of the sanctions imposed by the West and the resulting economic crisis which has already begun in the country. In particular, the exclusion of Russian banks from SWIFT will make commercial relationships with Russia extremely difficult while the invasion will affect Ukraine’s export of goods and complicate existing supply chains. 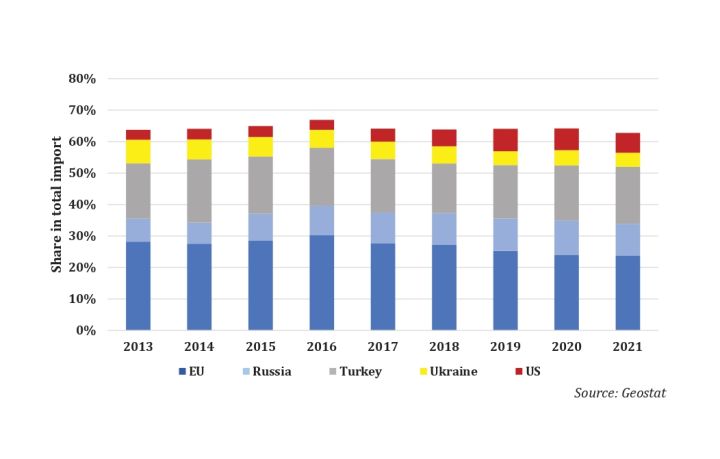 Exports are extremely important for Georgia’s manufacturing sector and for overall employment. In 2021, exports accounted for approximately $4.2 billion U.S., 7% of which came from Ukraine and 14% from Russia. In recent years, Georgia’s exports to EU states have accounted for approximately one fifth of total exports. As with imports, exports from Georgia to Ukraine will become more complicated, given the impact of the war on supply chain logistics. And exports to Russia will be much more difficult, as banking transactions will be significantly complicated after its exclusion from the SWIFT system. 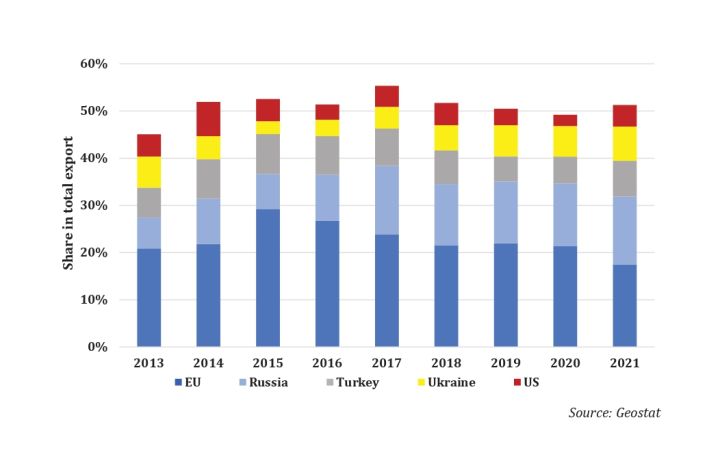 Clearly, both import and export flows will be reduced in Georgia. Georgian entrepreneurs will have to consider ways of replacing their trading partners, both for sourcing imported products and for selling exported goods. Note that imports significantly exceed exports in Georgia i.e. Georgia buys more from foreign countries than it sells to them.

If we buy more than we sell, how will import expenses be covered?

Chart 3 - Remittances to Georgia per countries 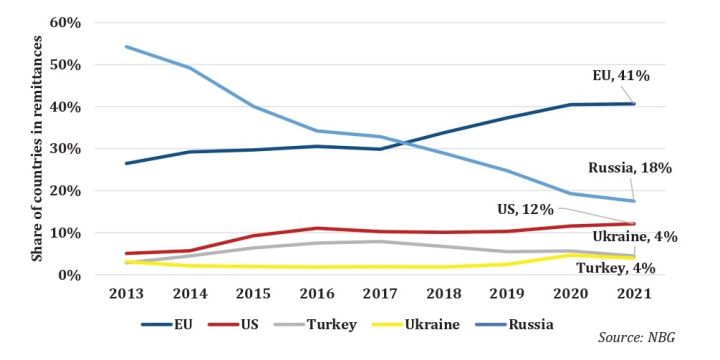 In conclusion, we may easily assume the following: this war is being waged between important foreign economic partners and will cause significant fluctuations in Georgia’s economy. However, it is difficult to determine the cumulative effect. The impact will be especially significant on the economic relationships which Georgia has with Russia. Georgian entrepreneurs will have to look for alternative commercial relationships, while the state will have to seek financial economic support from European partners.